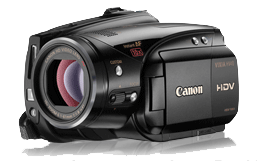 When recording, whether it be here at Ross in the lab or out in the field using your own (or borrowed) equipment, there are some things to keep in mind. Even the seasoned professional might need to remind him or herself of these tips from time to time.

Create story-boards (rogugh sketches of each scene), a script or an outline to be used as a plan and guide for your video recording. If doing an interview, think about transcribing the entire interview after you're done, and using the text to assemble a script of what you want your final product to look like. Thinking ahead like this means saving tons of time in the editing room.

Make sure your recording area includes the subject and backdrop with no unwanted objects in the shot, like extension cords or dust bunnies. Remember the rule of thirds, which states that things often look better if they're slightly off-center (think about how interviews usually look, where the person is looking "off camera" to their right.)

Make use of lighting, and change lights or light sources as needed to produce proper exposure. Be aware of shadows or harsh lights on the subject or other elements in the frame and adjust as necessary. Consider placing a gentler light behind your subject, too--this is called "backlighting," and makes your subject stand out a bit more.

Keep in mind the framing and composition of your shot. Look at the balance and spacing of elements in your frame. Consider utilizing the rule of thirds in compositions to create a less static feel.

When applicable, record in segments rather than in one continuous shot. Not only will this save you time when editing so you don't have to sift through a bunch of footage, it will also make editing easier because you'll have multiple files you can pull from rather than one long one you have to search through to find what you want.

Make sure that each shot looks the same and all subjects or objects are framed in the same location for every shot. Be aware of other elements that may enter your recording frame. Similarly, if also recording audio, keep an ear out for extraneous noises--things like car alarms, ringing phones, even loud birds, that may jolt the viewer out of continuity after you edit if the sound then "comes and goes."

Give Yourself Room to Work With

Record a few frames of extra video before and after each clip. This will feel strange at first, as most people's natural inclanation is to hit "STOP" immediately. Don't be afraid to record a little more than needed. It is much easier to take out extra footage than it is to create new frames, and you may rely on these extra few seconds when using transitions in editing.

Continuously check your audio levels. Plug a pair of headphones into the camera and listen as you record. If you just use headphones to "check" audio, be sure you depend on the device not to malfunction and drop audio half-way through (this isn't common, and certainly not in the new lab, but something to consider when using other equipment).

Don't be afraid to ask an interview subject to do an audio test, during which you can adjust audio levels on the recording device. You can adjust volume during editing, but get it as good as you can to make your work easier. Have the subject do something like spell their name and speak their professional title (which you may want to record anyway, especially if you plan to add title slides later).

When speaking on camera, pace yourself and try to speak as naturally as possible. Give yourself time to think about what you want to say, and if you make a mistake take a breath and start over from the beginning of your sentence--you can always edit that stuff out later.

While the goal may be to have an interview feel like a natural conversation, the most successful have a lot of pre-planning. Advise your interviewee to avoid one word answers, and instead speak in complete sentences. Have them incorporate your question as part of their answer. You can encourage this by asking open-ended questions (e.g., "tell me how you felt about the president's speech," instead of "did you like the president's speech?") Keep the pace of the interview slower than a normal conversation, and tell your subject ahead of time that you'll be leaving a second or two between questions to give yourself room to edit the video later. Lastly, try to remain as quiet as you can while your subject is speaking. In a normal conversation it may be expected to give a lot of "uh-huhs" and verbal encouragement to keep the person talking, but during an interview try to keep your encouragement non-verbal. Nothing is more frustrating than having your subject speak the perfect sound-bite only to have it ruined with your own voice muffling the most important word!

Record "B-roll," or extra footage of audio and video. While in another recording area, especially outside, record the background noises that take place. Also, take a few shots of the surroundings. This B-roll footage can be used to fill in gaps that may take place in your video, or cover-up jerky transitions.

Zoom only when necessary and avoid quick zooms which can disorient or cause motion sickness. The further you zoom, the more "shakiness" will pick up in the video. In addition, some cameras will use a "digital zoom," which is no different than just making the picture bigger. The same effect can be accomplished in post-production if needed, but it doesn't look as good as just moving closer to your subject.

Make Sure You're (Actually) Recording!

Even the best of us will make a silly mistake. Perhaps the most dread-inducing is finishing your shot or interview only to realize when you go to turn the camera off that the red "REC" is missing. With everything else that needs to be checked before starting, it's easy to forget the simple stuff.

So when you begin recording, take a moment before you start the interview or start the scene to double-check that the camera is indeed recording and has enough space, tape or battery left to finish the shot.

The majority of these tips come courtesy of the Carl D. Winberg, MD Presentation Practice Room.

The Walk Up Center is currently closed